The Treehouse of Lady Fuzztail

The creative adventures of a squirrel 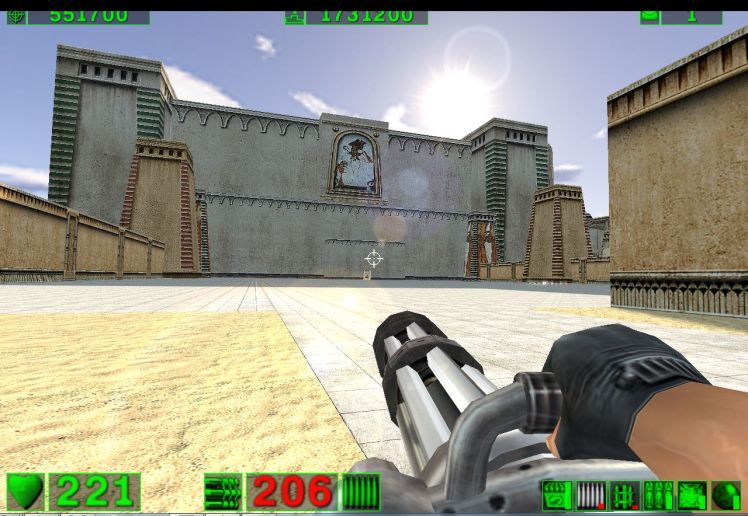 Ah, Triphon. This map got a sort-of sentimental value to me. I was like only 10 or 11, when I found this map on this very site. I played it and I really liked it. I liked that the story was set between Metropolis and Alley of Sphinxes, so I wondered if I could maybe add this level to the main campaign, as secret. This idea slept since then, and now I have the Extended project. Some things never change.

However, will I feel the same wonder today, as I did back then? Well, sort of; but also no.

For plot, there’s not much. Sam got lost on his journey to Thebes, and got lost. That’s about it. There are not many Netricsa messages either, just like 3 very brief ones about what to do, no real story whatsoever. Maybe if there were more explanation or lore behind the city, it would have been much better. Though, I have to say that the level itself really doesn’t need much of a story than the simple one it already got.

Very Croteam-like. The outside areas actually really remind me of the Legend of the Beast levels. And not just in visuals.

Visually, the level is mostly 0k. The outdoor areas look nice, though maybe a little oversized, and very Croteam-like. There are unique buildings here and there, and large, though quite empty areas. Nothing really outstanding visually, but very official-like on that front as well. Not much of a complaint there, outside of one LITTLE pet-peeve of mine as a mapper: Every tree on the map faces the same way, creating a really unnatural environment.

Look at them standing in a line, all facing the same way! AAAGH!

The indoor areas were more of a mixed bag. They weren’t really that bad, but nothing really outstanding either. One problem is that for some reason, all doors appear full bright, even in a mostly dark room. Another problem I found all around the indoor areas were shadows “cut in half”.

Gameplay wise, well… The readme file (Which is well made, and wow, Damjan tested this level!) is mostly right about the difficulty: It’s too easy on Easy, however it can be quite tough on Normal, mostly due to the moderate ammo and health around the map. It’s not too bad, but it really makes the map feel to be part of the Legend of the Beast SSHD DLC campaign. That doesn’t mean it’s bad, just kinda different, where you have to really conserve your ammo and health.

The early enemy spawning is mostly monotonous as well: Two enemies spawn, you kill them, two more spawn from the same place. Not exactly ideal, but not that noticeable when fighting a larger group. In about the second half of the level, the enemy spawning becomes a little better, so not much complaints there either.
The level layout itself is simple, and somewhat short, but it works for the most part. However, there are NO secrets on the level whatsoever, besides a single rocket ammo trap I found.
The level itself also supports Coop, which is some plus points for me, however I didn’t actually test for that this time around.

One more complaint about the level is the choice of music. Now, I maintain the idea that personal taste for any kind of genre shouldn’t affect the music of a map, but the map itself should affect the music, however, I think that the creator of the map really liked using that War theme in this map. I think that theme played over and over even if you’re just fighting a single kamikaze is just a little too much, as it’s a music “designed” for large and chaotic battles, or bosses. The other tracks used are the standard themes of the original game, and they work well.

Overall, the map is actually quite nice. It really has a touch of ye olde TFE feeling of the past, and besides a few complaints about the indoors and some of the battles, it is really very well made for someone’s very first Serious Sam map. Just because of this, I give it 5 extra points for unlocking the “Newbie Effort” achievement. (:P)